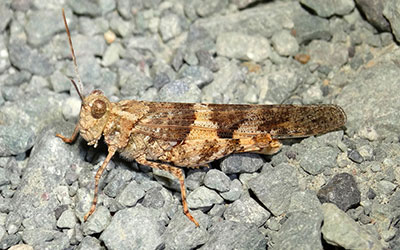 Good evening, Las Vegas, coming to you from a cold night here in the valley. So, we are now in our cold months of the year and there are not many bugs to be seen these days. However, one species has persisted so far, and it has been coming in massive swarms over the years. I remember as a kid, my parents had me at the YMCA during summer break. Exactly what summer this was I can’t recall but I remember it was my first time encountering a horde of grasshoppers. Since then, I can recall several years when the valley has had particularly bad years of grasshopper swarms and particularly, we are talking about the Pallidwinged Grasshopper.

Often in the valley, we see large invasions of insects moving openly outside during the late spring or summer months. The Pallidwinged Grasshopper is one of these insects, however this insect tends to move into the valley during the fall and very early winter. These swarms can vary in size and duration, but they can be extremely large. Some years have produced swarms that are large enough to appear as a storm system on weather radar. The grasshoppers themselves are not that large though. They have the capability to grow up to two or three inches in length, but they are usually consumed by wildlife before they can hope to grow that large. On average, the Pallidwinged Grasshopper is about an inch long, with a light desert sandy color with dark blotches along the wing covers. Like all grasshoppers and locusts, they consume grasses and other ground desert weeds as they move across a land mass. Moving is not a problem at all for these grasshoppers and all large grasshoppers and locusts as they possess a great ability of flight. Some swarms have been documented half a mile in the air.

While these grasshoppers give as a food source to many forms of wildlife, they also can take from us, agriculturally. There have been occurrences in Arizona of large outbreaks of these grasshoppers that inflicted serious damage to certain crops. Grasshoppers and locusts all feed voraciously on grassy plant matter. These swarms are not particularly common however, and the damage has not been severe enough to warrant full scale eradication efforts among officials. All and all, these grasshoppers usually cause an inordinate amount of panic and concern from folks who see 10 or 20 or 100 grasshoppers congregating around a park or a resident’s yard. But that is all that it is. Many insects that hop around outside. They don’t bite people and we don’t have an agricultural economy that can be threatened by these critters, and they don’t persist for the entire year. Sometime can go by before a major swarm pops up.

Most insects outside could honestly care less about mankind. They just carry on with their lives as if our world of us is too large to be seen. These grasshoppers are no different. They come, they eat, and they leave, usually in the belly of a mockingbird or a robin. So, Las Vegas, when you see a large amount grasshopper moving through the lawn, relax. They are just visitors!