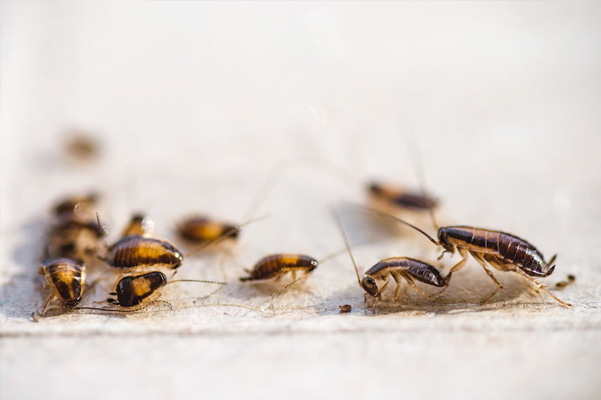 After decades of fighting them we still find cockroaches to be a formidable and common enemy. It is not so much that the weapons we have for our fight are not effective, since a cockroach properly exposed to an insecticide is very likely to die. The problems may have more to do with the biology of the cockroach, its amazing biological potential to produce more of its own kind, and with the lack of understanding or cooperation on the part of the customer who continues to provide sustenance and a home for these insects. It was said many years ago that, “pesticides cannot overcome poor sanitation”, and this situation has not changed. We cannot expect to spray an insecticide onto a filthy surface and have it available to kill a cockroach that may later wander onto that surface. Filth is very often organic matter, and organic materials have an affinity for pesticide molecules. The molecule is absorbed into the organic matter and is no longer available to a pest. “Filth” is exactly that – it is unsanitary matter on some surface where it does not need to be, and if that surface happens to be on your kitchen counter or floor or in a food service establishment, the stage may be set for human health to be in jeopardy. There are over 3,500 different species of cockroaches found throughout the world. In North America there are around 60 or so species, many of them native to this continent and most of them of no consequence as pests. Cockroaches are scavengers that feed on leftover organic materials, and when restricting their activities to the outdoors they serve some benefit to a properly working environment. It is the species that have found their way into North America from other parts of the world, and which often prefer to live within our structures, that have become the tenacious problem we have today. Chief among these must be the German Cockroach, actually native to North Africa, but such a prolific breeder that it can quickly populate and overrun a food account if sufficient food, water, and harborage are made available to it. Not far behind may be the American Cockroach, the Oriental Cockroach, and the Smoky Brown Cockroach, often found outdoors but commonly living or foraging inside as well. We also have constant newcomers, such as the Turkestan Cockroach, now being found more commonly in California. with all the things that do change in our world, some facts do not. The German Cockroach is a serious public health menace, firmly linked to the occurrence of asthma in children and incriminated as a vector of many kinds of pathogenic bacteria that it may carry on its outer body. Allowing this insect to continue to live in association with people in their homes or in food service settings is an invitation to illness. Cockroaches are far more than a nuisance – they are a threat to the health of humans. In fact, a list of known health problems associated with cockroaches includes asthma, abscesses, diarrhea, dysentery, gastroenteritis, typhoid and urinary tract infections. Up to 37% of children may be allergic to cockroaches. They also are survivors, and as organisms that have been around for over 300 million years, virtually unchanged in their appearance, they have seen and adapted to a great many events and changes in their environment that were destructive to other organisms around them. It also continues to be a fact that a cockroach needs several things in order to survive, just as it has for its millions of years of existence. Cockroaches have lived on the Earth, relatively unchanged, for over 300 million years, and they have been this successful because they have developed some excellent survival instincts. Like all living organisms this cockroach needs to eat, to have sufficient moisture, and to have a place to hide when it is not actively foraging for that food and water. Completely remove even one of these life needs and the cockroach cannot survive. However, all too often we fight our fight only with chemicals, and continue to allow the roach to have its earthly needs. The presence of these three undeniable needs – food, water, and harborage – is common for all animals, and completely eliminating one of the three on this triangle would cause the death of that animal. We may have learned that the House Mouse does not need to drink water, but it DOES need moisture, and gets that moisture from the foods it eats. In a very dry situation the House Mouse will still drink water if it’s available. We should never place a total reliance on chemicals to provide us with the best pest management. If we evaluate (a.k.a. “inspect”) a situation we can find many factors that are supporting the existence of the pest. Working to eliminate these factors plays a major role in providing satisfactory pest elimination for the longest period of time with the least use of toxic substances. This is not a criticism of insecticides, for they have a very important role to play when used properly. But, pesticides need to be only one part of the overall management program. Your American Pest Control Technician can advise you about the best method to solve your Cockroach problem.
← Letting the Bed Bugs Bite The Desert Blonde Tarantula →