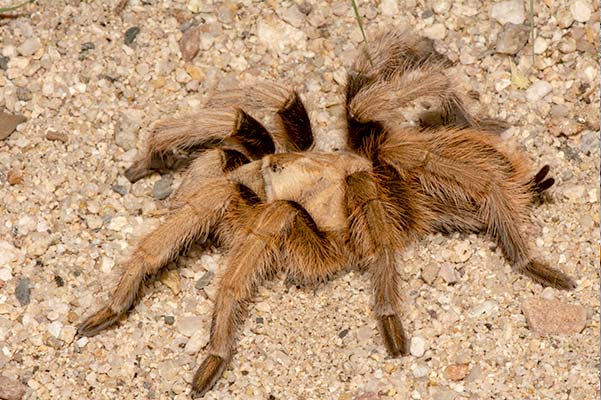 Contrary to popular belief, tarantulas are not true spiders. They are part of the arachnid family yes, but they are not true spiders. Arachnids are a group of some of the oldest land animals from the prehistoric perspective. Scorpions have been found in the fossil record dating back to almost 400 million years ago. Spiders have been around since before the dinosaurs time, mostly unchanged by evolution. The fossil record shows tarantulas date back to 300 million years ago, and the specimen had a 50 centimetre leg span (that’s almost two feet wide). There are a handful of desert tarantula species that inhabit the southwest deserts of the United States, the desert blonde tarantula being one of them. As with all the tarantulas, males are smaller than the female in body size and in overall size but they have longer legs than the females do. This might be because males do a lot more walking than females. Every fall here in our southwest deserts, as well as just outside of Las Vegas, male tarantulas go on the march. They trek out into the wilderness for hundreds of miles looking for one thing; sex. Tourists and locals alike will often see hoards of tarantulas, moving across roads and properties in the way of their search for a mate. Unfortunately many are killed along their march when they come in contact with our roads and highways. I say unfortunately because tarantulas, like all spiders are the main reason why mankind is not up to our knees in insects. Spiders do most of the natural pest control in our world. They conduct this form of pest control with large up-and-down moving fangs that inject a liquefying toxin into their prey. These fangs can also deliver a painful bite if you disturb them too much or hurt them. The desert blonde tarantula is the focus of today’s story. These creatures grow up to 6 inches wide including the leg span and while males do go on the march, females stay mostly confined to a burrow. However, tarantulas are active hunters across the board, so females and males will go on the hunt about two times a week. Wild tarantulas are nocturnal hunters while tarantulas kept as pets can be fed any time of the day. Females can live up to 30 years while males live up to, at most, 10 years and if the male sticks around too long after mating, he will often become a free meal for the female. Tarantulas are also covered in body hairs, and the abdomen houses defensive hairs that the tarantula will kick off with her back legs. These hairs are like needle like darts that can get into the skin and cause a severe irritation, similar to coming in contact with fiberglass. I personally think the female desert blonde tarantula is an absolutely gorgeous looking creature. The head and torso (combined and referred to as the carapace) is a sandy light brown color, while the abdomen is very dark brown covered in copper colored hairs. The first leg segments are the same base color as the abdomen, with the copper colored hairs replaced with brown hairs. The second, third and forth leg segments are the same sandy color as the head and torso. The last leg segment, her feet, are the same dark brown color as the abdomen.