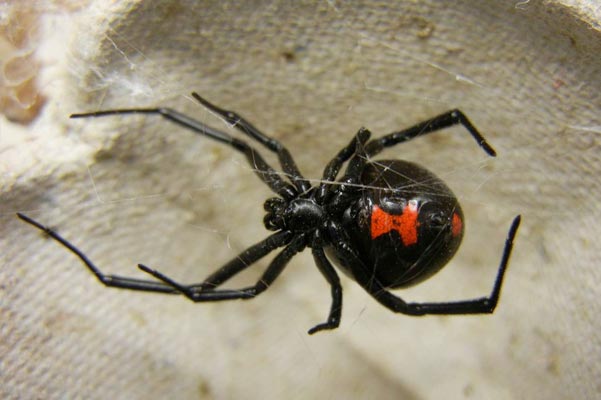 The Black Widow is often synonymous with fear or danger, and there is some warranted reason for that. Spiders have terrified people for millennia in general and many have a very potent venom, including the Black Widow spider. Its no secret that being bitten by a Black Widow is going to be a painful experience. Combined with the fact that Black Widows often like to hide in dark cramped crevices like in a shed or a dark spot in the garage, and you have a recipe for a bad reputation. Is that the truth though? Fortunately for us, the real truth is that Black Widows along with all other spider species do most of the actual pest control work on the planet. It’s estimated that spiders consume between 400 to 800 million metric tons of insects every year. That’s flies, wasps, cockroaches, crickets, earwigs, silverfish, ants beetles, and all other sorts of various crawling and flying insects that we would otherwise be swimming through if not for spiders. So lets take some time to talk about these creatures with an emphasis on the Black Widow since they have been doing pest control work for us basically for free. Latrodectus hesperus or the Western Black Widow is the species we are mostly talking about here in the Las Vegas valley. All spiders they have eight legs, six to eight eyes, two body regions, silk glands on the abdomen, a pair of fangs which inject venom and are predatory. Female spiders are also notorious for consuming male spiders after mating, which is not a trait that is exclusive to the Black Widow, but the name took never the less. All spiders are not the same though. Black Widows build a messy and irregular-shaped web, unlike the garden spider in your back yard that builds the typical spider web with perfect geometric sequencing. With that messy web, Black Widows sit in a dark crevice and wait for food to come to them, unlike the hairy wolf spider you see running across your dining room floor that actively searches for food. However, all spiders have venom and the Black widow is no exception. Black Widows have a type of venom called a neurotoxin, which means a type of toxin that affects the nervous system. The particular type of neurotoxin the Black Widow possesses tends to have a very powerful effect on large vertebrates and those large vertebrates can occasionally be us. In my experience in the pest control industry, the number one symptom from a reported Black Widow bite is mild to severe muscle pain, particularly in the abdomen. However, the fear that surrounds the Black Widow over its “deadly” bite is completely unsubstantiated. Unless you are child between the age of 1 and 5, an infant, or very elderly, if you are bitten by a Black Widow spider, you are likely to have a bad stomach ache and not much more. As for those who are most vulnerable to the Black Widow, the best way to protect them is not with fear. Knowledge, as usual, is the antidote to fear, and there is a lot of fear surrounding the Black Widow. Now that we know that the Black Widow likes to make a nest in dark cracks, crevices, shadowed holes along with dark sheds, dark places and unseen dark spaces, the best way to avoid the fear of being bitten and the health concerns from a bite is to never stick your hand into places that you can’t see. Fortunately for all of us, not sticking into places you can’t see is good advice for a whole arena of situations. So lets shift here from talking about spiders to talking about how to avoid them. Parents, make sure you instill into your children to never stick your hand into dark spaces. Kids, no matter how cool you think that dark space is, don’t stick your hands in dark spaces! Weekend warriors, look before you go sticking your hands into the shelves in the shed or that barrel in the garage, especially those senior citizen weekend warriors and to everyone in general, try to pay attention to whats around you, look before you act and if you do see a Black Widow in a dark corner in your garage, she is a big reason why you haven’t seen a cockroach walk across your kitchen floor. Don’t worry though because if you can’t stand the sight and presence of that spider, call American Pest Control and we will bring peace of mind back to your day.
← The Desert Blonde Tarantula Spring Time and Ants →