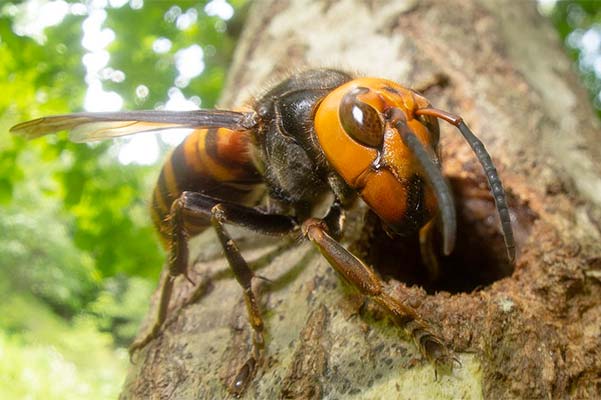 The Murder Hornet!! Well….kinda. These large Vespids do kill between 30 and 50 people across Japan a year, so I am not by any means saying that they are harmless. They have a stinger that is a quarter inch long and, like all hornets, they have very large and powerful jaws that can absolutely cut through skin. However, when we say “Murder Hornet”, what we are really talking about is that they kill bee colonies in the tens of thousands and can wipe out native bee populations in a season. Unfortunately, this very large and dangerous wasp has been unintentionally imported into the United States and as of now, only one nest has been found and removed in Washington state. There are still other nests that have become established in Washington state and in British Columbia, Canada and we currently do not know how many other nests there are. So lets talk about this hornet, what their economic impact is and how bad the problem could be.

First of all lets identify what we are talking about here. The Asian Giant Hornet is part of of a genus of species, 7 to be exact. They are true hornets which is what sets them apart from your common wasp or yellow jacket. A true hornet is always a social insect and is always able to eat meat. Wasps on the other hand can be vegetarian and solitary depending on the species. The main difference between the two is size. All hornets are much larger than wasps and, besides certain species of yellow jackets, more aggressive than wasps. The Asian Giant Hornet can grow up to two inches in length and sounds similar to a bumble bee when passing by, however some say that a passing Asian Giant Hornet sounds like a jet coming by which is clearly an exaggeration. Like all hornets, they operate in a caste system. There is the queen, which is responsible for laying eggs and growing the population size. Mature colonies will produce what are called “virgin” queens. These are queens that have not been fertilized by a male from a different gene pool. Once a colony grows to a certain size, the resident queen will produce these virgin queens and they will leave the colony, find a mate, and start searching for a hole in the ground or a hollow in a tree and begin a new colony. After the queen you have the workers. All social Hymenopterans have colonies that consists of females. These workers tend to the young, collect food and defend the nest. The colony only produces males when it produces new queens. They, like the new queens, leave the nest and go out to find a mate. Generally after mating occurs, the male dies. Now that we have covered the subject of our discussion, lets now talk about what they can do.

The Asian Giant Hornet, like all hornets, is omnivorous. It will eat any insect it can get its jaws on, any food garbage that humans leave for them to find and flower nectar. Why they have become such a problem for mankind is their sweet tooth for honey bee larvae. A total of 95,216 ± 5,551 honeybee colonies could be at risk across the United States if this pest is allowed to become an established invasive species. That’s a lot of honey. More importantly, the main risk here is pollination. Honey bees, both domesticated and wild, are responsible for the vast majority of the production of our agriculture and one colony can kill an entire honey bee hive in as little as 90 minutes. That’s a potential economic loss in the billions of dollars. Now you may be asking “If they can kill that many Honey bees here, why don’t they kill that many in Asia”. The answer is very intriguing in my opinion. In The Asian Giant Hornets native range, Native honey bees have been dealing with this predator for millions of years. In that amount of time, prey has to develop a defense, and the native honey bee has. When a scout hornet is on the hunt, it is alone. The colony will send out multiple scouts to forage multiple locations. When a scout finds a hive, it will attempt to enter they colony and it will lay down a pheromone marker. Then it will return to the colony and alert the rest of the hornets that it has found a food source. Well, the native bees developed a counter. They will let the hornet enter the hive and will slowly surround it. Once the scout hornet is deep enough in the hive, the honey bees will completely engulf the scout and start vibrating as one mass. This vibration will create a large amount of heat, and the honey bees can tolerate a temperature just a couple degrees above what the hornet can tolerate. After the vibrating mass creates the needed temperature, the hornet cooks to death and the location of the hive is still a secret.

﻿So how do we combat and prevent this killer from invading our shores and killing our bees. Well, Unfortunately that responsibility is currently only in the hands of the Department of Agriculture in Washington state. That’s not a bad thing though. However if the problem persists, we may need a better solution. One could be the importation of certain parasitic organisms that prey on certain species of animals. There are many parasitic wasps that are brought into the Untied States to deal with already established invasive species of insects. Once they parasite finds its host, it will reproduce and find more hosts. Once there are no more hosts to parasitize, the parasite will die off without its main host. Ultimately though the best thing the public can do now is be aware. Find your local pesticide managing department of government and save their contact information in your phone. Call that number if you suspect that you have seen an Asian Giant Hornet. There may even already be a hotline phone number established in your state. Just be aware and call the right people and do not even think of trying to take on these hornets yourself or you will most definitely regret that decision.